It’s hard to believe that Austin City Limits is nearly over! Last night I had the pleasure of seeing GAYNGS at an ACL after show at Emo’s in Austin’s Red River district

The show opened up with Brooklyn-based Indie outfit Bear in Heaven. I didn’t make it in until about half-way through the set, but enjoyed every second of it. I’m new to the power trio, but am definitely now a fan of what their form of what they call “psychedelic minimalist pop.” Despite the self-given genre, I found their sound anything but minimal with the pulsating bass, dreamy synth/pedal work, out-of-this-world guitar (Adam Willis), and ethereal voice (Jon Philpot) floating over tribal drums (Joe Stickney). What struck me most was how comfortable they were with their instruments; like they were holding pillows. They finished the set with the popular ‘Lovesick Teenagers.’ As a drummer myself I especially enjoyed the ending epic tribal drum solo. In my opinion Bear in Heaven had the perfect balance of enthusiasm and humble bad-assedness. 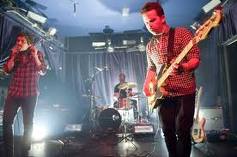 Can I get a slow jam?

The set change was just as epic as Stickney’s drum solo since GAYNGS is a huge ensemble, but it was well worth the wait. I enjoyed picking out the members Ihad seen in their videos as they set up their gear. When the lights went down and the “Bands Only” door closed we knew it was time. GAYNGS mobbed the stage in their fedora, Eskimo hat, button-down, vest, bow tie, colorful shades, and dino-hoodie wearing glory, many lighting up cigs and popping open beers in preparation (I saw that they discovered Lone Star, Austin‘s favorite cheap beer). The show began with an auto-toned intro from a old, bearded, slightly haggard looking guy whom they announced as Mr. Max Blevins, the newest GAYNGSter. I couldn’t find anything about him on their site, so I’m thinking they just saw him on the street, liked his beard, and asked him to start the show.

Inevitably the show started with my favorite track, ‘The Gaudy Side of Town.’ The luscious sax, sexy auto-toned voice, and dreamy harmonies created a sweet breeze in the crowded room. They left the gaudy side of town for the bluesy track ‘The Walker. ’They encouraged us to sing along to the 10cc cover of ‘Cry.’ We dried our tears for ‘No Sweat.’ A sonorous sax solo from Michael Lewis in ‘False Bottom’ drew a display of jazz hands from the other members prompting us to do the same. They followed with the slow groove of ‘The Beatdown.’ The newest GAYNGSter was again invited on stage to introduce ’Crystal Rope,’ followed by ‘Spanish Platinum.’ Katey Morley in her raccoon hat hopped on stage for ‘Faded High,’ another one of my favorites. A crazed male fan hopped on the stage who was promptly asked to leave. The song ended with an amazing solo from drummer Joe Westerlund in his super hero mask. GAYNGS then took us for ‘Ride’ which brought us to ‘The Last Prom on Earth.’ OF COURSE there was an encore. GAYNGS gave us more with a chill-provoking rendition of George Michael’s ‘One Last Try’ sung by dino-hoodie clad Shon Troth, followed by their cover of Alan Parson‘s ‘Eye in the Sky‘. There are 23 GAYNGSters and I did my best to match names with faces, so please forgive me if I got one wrong!

I was supposed to meet up with GAYNGS visionary/digital synthesis extraordinaire Ryan Olson for a follow up interview before their ACL stage performance, but unfortunately he informed me about two hours that their bus driver made off with their bus AND all of their gear. As a result they will not be performing at ACL today. Please keep them in your thoughts and do what you can to help them out. They were absolutely amazing last night.

Fortunately I did get a mini interview with Ryan over the phone a few weeks ago to find out more about GAYNGS.

Lacey Lewis: How did GAYNGS get started?

Ryan Olson: I was hanging with Adam (Hurlburt of Solid Gold) and Zach (Coulter of Solid Gold). We decided to write a pop/sound track album and started laying down some tracks. We scheduled a recording date and it just snowballed into a bunch of people.

LL: How did you meet all the members?

RO: We were all playing a lot of music and they’re all friends of mine. There are 23 people in all with about 10 touring.

LL: What is the vision behind GAYNGS?

LL: What about the song inspired you?

RO: The way it’s arranged, the composition, the overall vibe of the song. It’s unorthodox for a pop song.

LL: What is your personal musical background?

RO: I’ve been playing in bands constantly since I was 13. I don’t really have formal training.

LL: Tell me about the name GAYNGS?

RO: It means a lot of things.

The 20 Reasons You Decided to Move to Austin, Texas (most of them concerning Harlem).