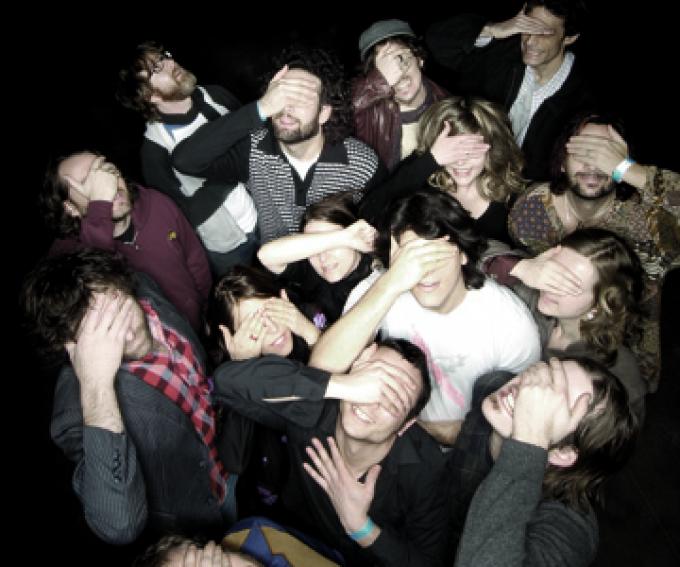 Congratulations, Broken Social Scene! After going on 10 years of music making and touring, BSS has won a little something for it-best live show of 2010. I honestly couldn’t agree more. Why? Because I have been blessed enough to experience all that is the gloriousness of Broken Social Scene live, and after all it took to get them together, I appreciate them even more.

And here’s why: remember that one song? You know, that one from the 90’s. It goes “I know its up for me, if you steal my sunshine!” Really, the only part anyone ever knew was the “steal my sunshine” part, but regardless, it was infectious enough for everyone to walk around shouting it incessantly for hours. Well that my friends, was in part a product of Brendan Canning, one of the forefathers of Broken Social Scene. He was a temporary member of the stolen sunshine band Len and helped bring that song and the band to the top of the charts at the time. Using the money he earned from the song’s success, BSS’s debut, Feel Good Lost, was able to be released. And thus, a musical baby was born. Over the years it has progressed, matured and is continuing to flourish into a beautiful discography. At this post pubescent stage of its life stands Forgiveness Rock Record, the band’s latest release.

Brendan Canning doesn’t take full responsibility for all the band has become and for that he shouldn’t.  In fact, he’s only sang lead on only 3 of the band’s songs. But even still, Broken Social Scene is like the new age version of the supergroup that was ever so popular in the late 60’s and 70’s. Back then we had Eric Clapton, Jack Bruce and Ginger Baker in Cream and nowadays we have Andrew Whiteman (Apostle of Hustle), Leslie Feist, Elizabeth Powell (Land of Talk), Emily Haines (Metric), and Amy Millan (Stars) to name a few of the acts that occasionally separate themselves from their own acts to be a part of Broken Social Scene. Through all of the ups and downs and ins and outs, the band still manages to come together even if only momentarily to make something happen. As BSS member Charles Spearin said in an interview with Pitchfork, “We come together, we break apart.  Broken Social Scene is this umbrella which keeps it convenient so we can keep on making music. I’m not surprised that we’re still doing it; I’m a little surprised we have the same umbrella.”

Broken Social Scene’s incredible venture to stardom is chronicled in their book This Book is Broken. The frustration of all the arguments, the beauty of all the music and the everything else that has led them to be the band they are now can be found in these pages. Its enough to help you understand why they got best live show if you haven’t seen them before. But nothing will be a better explanation than seeing it for yourself.

Anthems of a 21 Year Old Girl: Broken Social Scene is Coming to Town!