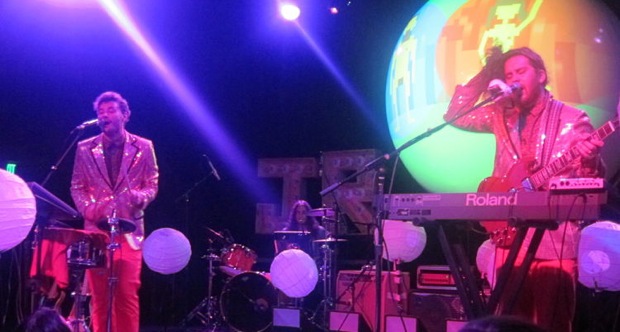 Whenever a band uses extensive synths and heavy, yet interesting production in their sound, there will always be a challenge in trying to get that music to translate well in a live setting. This is one of the major challenges that many indie and (in some cases) not so indie bands face today. It can either sound heavy or hollow, sometimes at the same time. In the case of Detroit-bred indie synth pop outfit Dale Earnhardt Jr. Jr., it was a combination of these two elements.

The duo, along with two backing musicians, are currently out on a short run of dates to promote their Record Store Day EP release. Thursday night’s stop at the El Rey Theater in Los Angeles presented an opportunity not only for Daniel Zott and Joshua Epstein to showcase this material, but also what’s to come on their upcoming sophomore album for Warner Bros.

At a venue like the El Rey, it’s difficult to squeeze a lot of stage production in because of the small stage. But Dale Earnhardt Jr. Jr. made the most of the limited space. For up-and-comers, they understand how to fill the stage with props, albeit not necessarily in a Pink Floyd-esque extravagant way. There were cut out lights in the shape of Jr. Jr. on both sides of the stage along with a huge balloon that changed images and faces over the course of the night. Add to that matching sparkly gold jackets, red pants and plaid shirts, the guys looked pretty spiffy and had they not been on stage, they would have been at home at any east side watering hole.

Strangely enough, over the course of their 75-minute set, it was the unheard new songs that served as the evening’s highlights. Though it was hard to decipher some of the lyrics and song titles, the tunes sounded crisp and tight. Hearing these songs made it easy not only for fans, but for this writer to get excited about what’s to come for the guys.

Early in the show, the guys got the crowd going not only by bouncing around on-stage, but also when Epstein jumped into the crowd. Believe it or not, that wasn’t even the most exciting thing he did. When he confessed to the crowd that he left his native Detroit to move here to our fair city, Epstein was greeted by one of the loudest ovations I’ve ever heard at an L.A. show.

While at points the show was inconsistent due to the sound (not the band’s fault by any stretch), Dale Earnhardt Jr. Jr. definitely have the charisma and the chops to succeed as a live band. Though it is easy for them to rely heavily on their synths, and yes, that does take away from the show a bit, they’re able to bounce around the stage and utilize other instruments like guitars and drum machines. The band’s new album will be out later this year and hopefully they’ll be playing bigger rooms so their creativity will be best utilized along with a more impressive soundsystem.