Chicago – Have you ever found yourself falling in love with a new band, only to discover said band lives oh so far away – we’re talking on another continent – and won’t be touring near you any time soon? Yeah, it’s the pits, right? Well, that’s my experience with Australian band Hockey Dad. While doing some SXSW work research back in 2015, I discovered this surf rock duo, comprised of singer and guitarist Zach Stephenson and drummer William Fleming, but also quickly discovered that Hockey Dad would not be stopping in Chicago during its U.S. visit.

Fast forward to summer of 2016, and what do I see on my Facebook wall? A Hockey Dad North American tour announcement, with a Chicago stop! I pulled out my planner and penciled in the date – ugh, yes, I’m still stuck on old-fashioned paper planners; analog all the way, eh? When the day finally arrived, I couldn’t be more excited to see Hockey Dad rock out at the Empty Bottle. And boy, the Wollongong duo did not disappoint! The amount the noise that these two generated was impressive as all hell, and the two sounded so polished, yet held on to just enough of that raw DIY feel.

Fresh off the release of debut LP Boronia (Kanine Records), Hockey Dad took the stage with plenty of new songs, including “Laura” and “Jump the Gun.” Though, Stephenson and Fleming also played tunes from their 2014 EP Dreamin, like set opener “Lull City” and the hard-hitting “Babes.” Flemming’s hair flew in every direction, as he ferociously took to his drum kit. Stephenson sang into his microphone as if his life depended on it. Of course the guys also played the irresistible single “Can’t Have Them.” People immediately began to dance. Two girls to the right of the stage smiled with delight, while shaking their heads, their hair flying in beat, along with Fleming’s. Cheers came from the crowd in approval.

The set ended with fan favorite “Seaweed.” Throughout the night, fans had called out for Hockey Dad to perform this sweet number. We should’ve known they were saving one of the best for last. The mood in the room suddenly changed – like we were all witnessing history being made. It was magical. So many acts have started their careers playing the Empty Bottle while stopping through Chicago, before going off to become legends. In that moment, I couldn’t help but think the same will hopefully be said for Hockey Dad. They sure do deserve it.

Stephenson and Fleming left the stage to boisterous applause. People screamed, “One more song!” Others shouted, “Beach House.” Finally the duo returned to the tiny stage, and gave the fans what they wanted, closing out the evening with a “Beach House” encore. 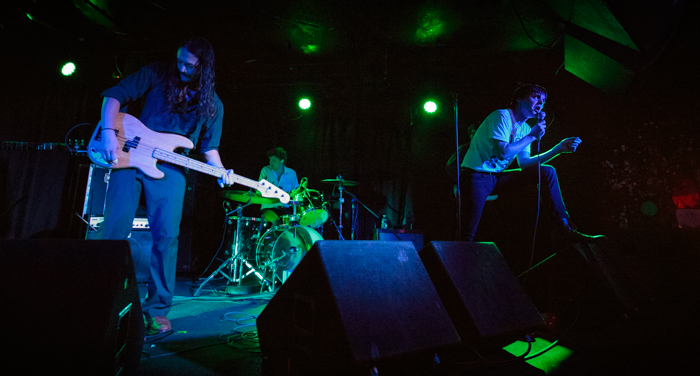 Before Hockey Dad took to the stage, Athens, Georgia band Muuy Biien put on an excellent, energetic performance. The southern punk quintet has been touring with Hockey Dad, and the pairing couldn’t be more perfect. Members Joshua Evans, Xander Witt, Robbie Rapp, Jacob Lake, and Parks Miller packed in on the cramped stage, but the close quarters didn’t stop the five-piece from unleashing some mind-blowing noise-rock, with songs like “D.Y.I“ showing off frontman Joshua Evans’ crazy antics. Muuy Biien recently released a new single, “Another Chore,” from the band’s upcoming third LP Age of Uncertainty, due out Oct. 28 via Autumn Tone Records, so expect to hear more from Muuy Biien!

Hockey Dad is on tour now, and following this North American run, the band will be touring Australia. Tour dates can be found on the Hockey Dad Facebook page. Boronia is available for purchase on iTunes.

At the age of six, Sarah Hess discovered True Blue by Madonna. This resulted in her spending hours in front of the bathroom mirror with a hairbrush microphone, belting out "La Isla Bonita" off key. Her love for music only intensified over the years thanks to her parents; her mother exposed Sarah to The Jackson Five and had her hustling to the Bee Gees, while her father would play her albums like 'Pet Sounds' and 'Some Girls' from start to finish, during which he'd lecture on and on about the history of rock & roll. Sarah would eventually stumble upon rap and hip-hop, then punk and alternative, and fall madly in love with Jeff Buckley and film photography.

After attending The School of the Art Institute in Chicago, Sarah went on to study education at Dominican University, earning a degree in history. When not teaching, writing, or taking in a show, she is most likely to be found with a camera to her eye or hanging out in a darkroom.

A Sweet Sunday with Alberta Cross and Friends