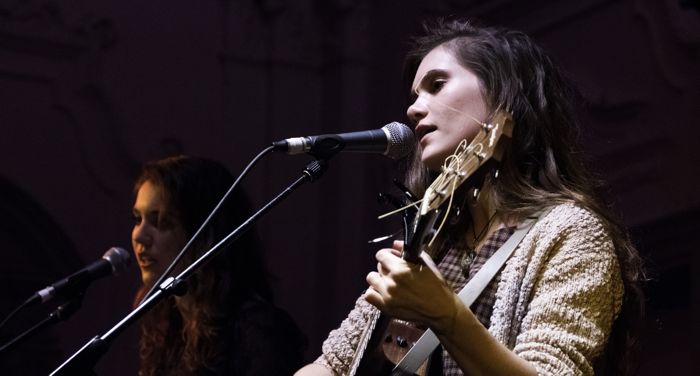 San Francisco – Sister duo Lily & Madeleine made their second appearance in San Francisco recently. Originally from Indianapolis, the young Jurkiewicz sisters (aged 18 & 20) entertained a big crowd of varying ages at The Chapel in the Mission District. Lily & Madeleine dabble in the area of folk/pop, carefully plucking away at keyboards and acoustic guitars. The two are known for their incredible voices, though, which are so full and rich, even at such young ages. The two voices meld together wonderfully, creating a honeyed melody. They sound great on their album, but even better live.

Playing in an old church which has been converted to a music stage, Lily & Madeleine created an intimate and comfortable setting. The room was lit by the stage lights that hit the hanging disco ball, creating an interstellar effect. Modest on stage, yet very sweet when engaging with the audience, their performance was calming to say the least. The audience was attentive (probably because of their enchanting melodies, let’s be real) and thoroughly enjoyed the experience.

Their songs expressed melancholy teenage thoughts as well as heartfelt young love. They were joined by opening act, Shannon Hayden, who played her electric cello alongside their own instruments. It was especially interesting to see the sisters sharing glances and small smiles with one another in between songs. It must be tough to always be on the road with your sister, but the audience could clearly feel the bond between the two. It also affects their voices, harmonizing with one another in such a beautiful way.

Most of the songs were from their newest album, Fumes, on Asthmatic Kitty. Best New Bands named it one of 10 Albums You Might’ve Missed In 2014, calling it “a particularly satisfying…and extremely polished record…” Lily & Madeleine state on their website that it is their goal to create a new album every year for three years. So far, they’ve conquered album one and two and seem on the road to victory with album three. During the show, they treated the audience to sneak peeks of several new songs. Informing the crowd that they had just written these songs and wanted to try them out for a live audience. The new songs were as good, maybe even better, than the ones on the previous albums. Their voices have a way of being sweet and sultry at the same time, creating a very interesting vocal dynamic.

Though the set was short (they thought so, too!), it was an amazing one. Their music is mesmerizing and their voices were gorgeous. I highly recommend checking them out when they make it out to your state!

Check the Lily & Madeleine website for details on their remaining tour dates and their albums.

Lily And Madeleine At Bush Hall In London