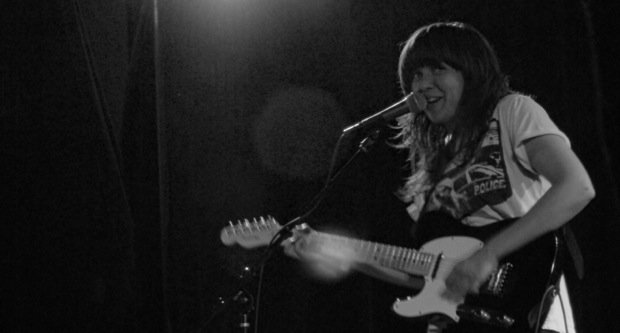 Brooklyn – Saturday night in Williamsburg boasted a wonderfully vibrant backdrop for culture-seekers, who snaked through the thawing streets of the borough in search of something major. Those of us who landed at The Knitting Factory were the lucky ones. With back-to-back sold out concerts last weekend, Saturday night marked the second showing of Courtney Barnett in all her glory. With tickets in high demand, the scenario affirmed what Barnett fans have already decided with solid resolve – herein lies a stunningly talented musician whose ability to connect to her audience has mass appeal.

This indie-folk rocker hails from Melbourne, Australia, and has garnered a serious and devoted following in her yet brief career. Barnett’s participation in the 2013 CMJ Music Marathon won her stellar reviews from both Rolling Stone and The New York Times, and every show she delivers seemingly solidifies her rising stardom.

Barnett’s debut EP, I’ve Got A Friend Called Emily Ferris, premiered in 2012 on her self-made label Milk! Records.  Her second EP, How To Carve A Carrot Into A Rose, continued to win her praise throughout 2013, particularly for the airy and affecting single “Avant Gardner.” Barnett pooled tracks from both EPs to create The Double EP: A Sea of Split Peas, which was released internationally in May of last year via House Anxiety/Marathon Artists.

Perhaps the most alluring element of Barnett’s work is the tell-all landscape her songwriting inhabits. Her lyricism betrays an intricately developed sense of self, ranging from romance to lust, and embraces an underlying current of poignant inter and intrapersonal explorations. With just a touch of self-deprecation worked into her songs, Barnett comes through as an utterly endearing personality. If ever a breakout musician deserved accolade as of late, Barnett is it.

Performing live, her charm is more apparent than ever. This is a singer-songwriter with an impossible amount of magnetism, whose imperturbable demeanor and warm smile betrays a starry-eyed sense of wonderment at the “all eyes on her” scenario she has landed in.

At 10:15 PM, Barnett took the stage accompanied by band mates and wordlessly launched into the high-energy jam “David, immediately followed by “Canned Tomatoes (Whole).” Next up was “Out Of The Woodwork,” a slow swelling ballad, deeply steeped in nostalgia and infused with a dark twist. On this track, Barnett evidently addresses some grievances of an unclear nature. Yet, the grace with which she cuts at the core of whoever crossed her is masterful, rich in emotional intelligence and elegantly composed. Whoever would challenge this woman is mad, and probably sorry for it in light of this track; Barnett is brilliant. 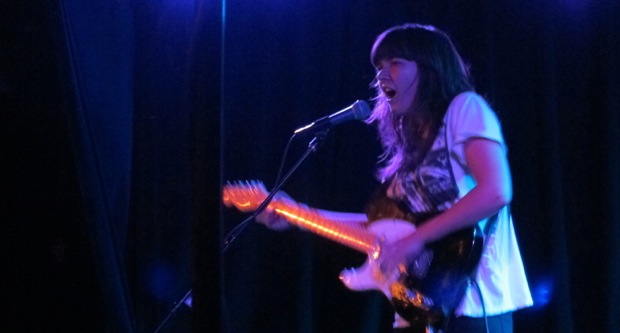 Next up was “Are You Looking After Yourself?,” in which a conversation plays out regarding the life of a musician and the evident questioning anyone in the profession often fields.  It’s brave of Barnett to share a dialogue such as this and, as is true of her work at large, the inviting nature of her writing immediately lands her a unique place in our collective psyche.

At this point in the show, Barnett addressed her audience for the first time, saying, “I haven’t had much of a chance to go exploring around the city. Where’s the best place to go?” The resounding, seemingly scripted, response from the crowd was “BROOKLYN!” “I can’t hear over all the shouting,” she answered, “write it on a piece of paper and give it to me after the show. We’re going to play another song now. This one is called Avant Gardner.” Performed live, this track all but glistened.

Transitioning next into a working draft of a brand new track, the words to which were not yet written, Barnett confessed, “It’s not very good. Let’s pretend this isn’t happening.” Although it is always a challenge to comment on first drafts, Barnett’s sincere gift for crafting melodies was evident and the song in full seemed promising.

The show concluded with rambling variations on “Scotty Says,” “Lance Jr.” and “History Eraser.” Of course, the crowd held out for an encore. Yet, a master crafter of long-term allure, Barnett left her audience wanting more. Currently on tour to support Billy Brag for the duration of March, Barnett will continue touring the UK, Portugal and Spain through early June. Those of us in the contiguous can mark our calendars for the fourth of July, when Barnet will grace the bill of Sasquatch Music Festival in Washington. In the meantime and like all other fans infected with mutual appreciation for this music maker, I’d like to go on record pledging to always wear my hair down and to invest in more band Tees.

Born in Mexico and raised in Toronto, Jerusalem and Chicago by a pair of journalists, Liz comes to BestNewBands.com with an inherited love of writing. After discovering a niche for herself in music journalism and radio while at Bates College in Maine, she always keeps a running playlist of new music to soundtrack her place in the world. Liz is passionate about helping dedicated, talented musicians gain the exposure they deserve. A recent transplant to Brooklyn from Hawaii, she is plagued by an incurable case of wanderlust and cursed with an affinity for old maps and old things like typewriters and vintage books. She adores photography and running and is very good with plants. Having come of age in Chicago, Wilco speaks to her soul. If she could be anything, she would be a cat in a Murakami novel.