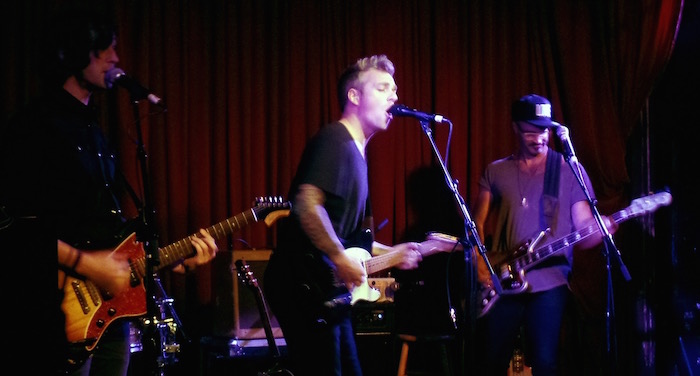 Los Angeles – While awareness of Greg Holden’s music is just now beginning to grow, the seeds of his prominence were sown over the last decade. His first taste of the spotlight was winning Lancashire Evening Post’s 2005 battle of the bands, and followed that victory with several Youtube-based video series. His channel in turn attracted the kind of audience that afforded him the ability to release two independent records, A Word in Edgewise and I Don’t Believe You. After building a strong cache in the underground singer/songwriter scene, his major label debut Chase the Sun was released on Warner Brothers Records in the spring of 2015.

In preparation for a strenuous 16-stops-in-24-days tour (not including this Los Angeles appearance), Holden kicked things off with an early performance at a sold out The Hotel Café in Hollywood. Despite the 7 PM start time, the place was sold-out, with the crowd trailing far back into the quaint venue’s narrow bar area. Judging from the performance by the New York-by-way-of-Aberdeen, UK singer/songwriter and his band, the tour will undoubtedly be a successful one. Despite the band’s at-times “soft” sound, Holden adds a level of emotional intensity that makes even an acoustic ditty sound powerfully heavy.

That’s not to say Holden is afraid of letting it rip every now and again. Several of the songs in the band’s 40+ minute set offered light levels of distortion that elevated them into a sort of pop-punk/folk-punk hybrid, with an emphasis on the pop. That his songs translated well into both acoustic and electric sounds should come as no surprise, considering I Don’t Believe You was re-imagined in acoustic form a few years after its original release date. The band touched on that dually released album briefly in the middle of the set, performing “The American Dream”.

While Holden’s songs tend to have heavy subject matter, ranging from personal conflicts to global political issues, he maintained a jovial demeanor throughout his set. Joking with the crowd during the performance he lamented, “Oh LA – I keep threatening to move to you. I have a love/hate relationship with LA.” Unsurprisingly, someone from the crowd immediately responded, “We all do!” Truer words were never spoken.

Other songs performed during the set included the sing-along “Give it Away”, a new unnamed song, and a song he explained was an indictment on the “selfie” generation and our self-obsession. He also invited his friend Garrison Star onstage to perform “In the Next Life”, explained as “a song about almost dying in the Himalayas.”

Things got most serious during Holden’s stirring performance of “Boys in the Street”. The ultra straightforward nature of the song’s lyrics works in its favor; it speaks to the songwriter’s abilities that telling a structurally-uncomplicated story can be so affecting. The lyrics outline the struggles and strain between a young man (presumably Holden) and his father after the former comes out as gay and makes no attempt to hide it. Embarrassed at first, the father implores his song to quit embarrassing his family and his country, to “stop kissing boys in the street”. He maintains this mindset throughout the majority of the song. However, the father has a change of heart when he is on his deathbed, recanting what he told his son throughout his entire life, concluding with the obvious but still powerful line “Keep kissing boys in the street.”

Greg Holden and company head out on tour throughout the month of October, visiting the West Coast, Southern United States, and three dates on the East Coast. Take a look at his tour page for more info and tickets.

Perhaps it was years of listening to the eclectic and eccentric programming of KPIG-FM with his dad while growing up on the Central Coast of California, but Matt Matasci has always rebuffed mainstream music while seeking unique and under-the-radar artists.Like so many other Californian teenagers in the 90s and 00s, he first started exploring the alternative music world through Fat Wreck Chords skate-punk.This simplistic preference eventually matured into a more diverse range of tastes - from the spastic SST punk of Minutemen to the somber folk-tales of Damien Jurado, and even pulverizing hardcore from bands like Converge.He graduated from California Lutheran University with a BA in journalism.Matt enjoys spending his free time getting angry at the Carolina Panthers, digging through the dollar bin at Amoeba, and taking his baby daughter to see the Allah-Lahs at the Santa Monica Pier.

Ménage Adapt To Suit The Hotel Café & Everybody Wins