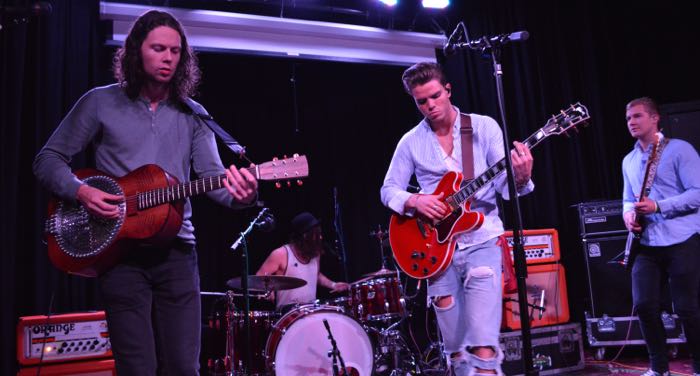 Seattle – On Sunday night at The Vera Project, audience members were privy to Kaleo’s first headlining show in the Emerald City. Following a sold-out show with Vance Joy just a few days before at the Showbox, the Icelandic folk-rock quartet rocked Seattle’s all-ages music and arts center with a memorable performance.

“The devil’s gonna make me a free man,” guitarist and lead vocalist JJ Julius Son growled into the mic on opener “Broken Bones.” It’s an eerie, beautiful blues tune that wouldn’t sound out of place in a Quentin Tarantino spaghetti Western.

Following that was Kaleo’s anthemic rock song “I Walk on Water.” Starting with nice, echoing Eddie Vedder-esque vocals and simple guitar strumming, the tune builds with the addition of harmonies and rolling percussion. “Put your trust in me,” Julius Son pleads before electric guitar and drums take off soaring.

Swapping out his red electric guitar for his acoustic, Julius Son begins an easy strum as he sings, “Imagine myself in an automobile, 100 miles an hour, only me at the wheel.” Relaxed harmonies and brushes on the snare courtesy of David Antonsson Crivello, combined with lead guitarist Rubin Pollock’s slide and the audience clapping along, lent themselves to the rustic, folk vibe of “Automobile.” Julius Son ponders driving down to “San Diego, San Francisco, Sacramento,” the lyrics inviting you along on the car ride, windows down, wind in your hair, “all the way to Mexico.”

Kaleo transitioned nicely into their hit single, “All the Pretty Girls.” Julius Son closed his eyes as he breathed into a gorgeous falsetto on this song that showcases his impressive vocal range. As he told Best New Bands in a recent interview, it’s a song inspired by summers in Iceland, the “kind of song you just kind of play sitting at the fire or something, at 2 or 3 a.m., drinking red wine.” Certainly the audience felt the vibe, as they gathered closer to the stage, swaying at the intimacy of the first verses and choruses. As the song crescendoed, the room was filled with the emotion projected by the band, creating a heartfelt, beautiful performance.

“I Can’t Go on Without You” saw Julius Son transition back into his bluesy growl, as the slide guitar and heavy blues-rock sound created another forlorn, Western atmosphere, with impressive whistling at the end. The energy picked up with “No Good,” highlighting both Pollock’s and Crivello’s proficiency on the guitar and drums, respectively. Following was “Pour Sugar On Me,” a sexy, bouncy blues-rock tune with suggestive electric guitar; the audience felt the heat.

One of the show’s highlights was a cover of “Bang Bang (My Baby Shot Me Down),” which was a haunting, heavy performance. The next song showcased Kaleo’s strong timing as a group, and the audience got to see them having some fun together as Crivello stood up and walked around his kit, banging his drumsticks around, as Danny Jones played an understated walking bassline.

Closing their performance was “Rock’n’Roller,” aptly titled to honor the group’s primary musical influences of classic rock. It was a powerhouse of a performance, with pounding drums, a great electric guitar solo, and gritty vocals, and a strong close to their set.

Opening the evening was an acoustic trio project from the Seattle-based group Emma Lee Toyoda, typically a five-piece outfit. In their performance at The Vera Project, only the eponymous leader (guitar, banjo, lead vocals), Adelyn Westerholm (violin), and Veronica Johanson-Faison (backing vocals, melodica) took the stage. It was a lovely performance that showcased Toyoda’s versatile alto voice, enhanced by Johanson-Faison’s pure, tight harmonies and Westerholm’s beautiful tone and capable bowing. Their strong indie-folk vibe and harmonies are reminiscent of First Aid Kit, and promise much more to be delivered as they continue on in their musical career.

Unfortunately, as announced on Kaleo’s Facebook page, JJ Julius Son recently injured his finger, and so they have canceled several upcoming shows. However, visit the band’s official page to stay up-to-date on their tour.

Caitlin Peterkin is a Seattle transplant fresh from the Midwest. She owes her passion for music to her parents, who filled the house with artists from The Beatles to The Beach Boys, Simon & Garfunkel to Carly Simon, and Jackson Browne to Michael Jackson. One of her favorite memories includes being presented with her mom’s original vinyl copy of Sgt. Pepper when she got her first record player.

With degrees in journalism and music, Caitlin’s written for Paste Magazine, The Chronicle of Higher Education, and MajoringinMusic.com. She loves cheese, laughing at GIFs of corgis, road trip sing-alongs, and connecting with people over good beer and good music.

Kaleo Talks About Their Influences And Their Upcoming EP