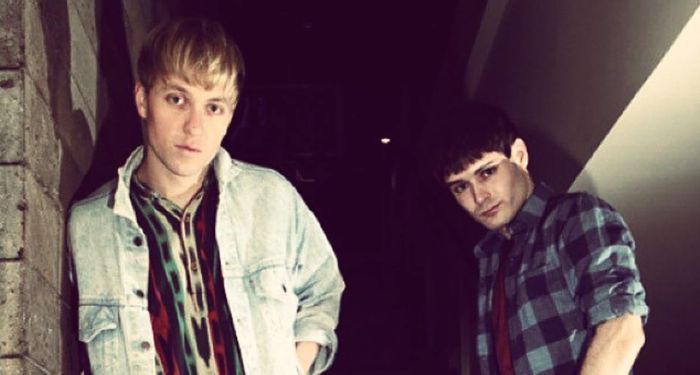 Los Angeles – Brooklyn indie pop misfits, The Drums, are back after three years of turbulence. Founding members Jonathan Pierce and Jacob Graham find themselves back to square one. After the departure of two members between their previous record, Portamento, and this latest one, the duo return with a much darker snyth-pop sound than ever before. The Drums seek a reinvention as they emerge from the misty fog with, Encyclopedia.

When the band announced the album last month, singer Jonny Pierce noted, “We were feeling very angry, confused, and alone when we made this album, and we wanted to be very honest this time around, even if being honest meant making some people uncomfortable. We’ve left the beach for higher ground, always searching for hope.” The darkness, anger, and confusion are all here sprinkled with summery beats. However, this summery resonance is painted in a much darker, moodier light.

Right away, The Drums echo completely different than their prior walls of sound. “Magic Mountain” isn’t something you’d come to expect from The Drums. It’s loud, disorderly, and comes off like Animal Collective lite. It’s not egregious by any means, but feels like The Drums were blowing off some steam.  “I Can’t Pretend” proves to be a much better, more familiar landscape. A more psychedelic approach, “I Can’t Pretend” treads along with melancholic sounds and lyrics. The Drums are definitely back with their dejected ways. Subsequent track, “I Hope Time Doesn’t Change Him,” follows the same, lowbeat path. I dig it when The Drums appear in this light….dark and brooding, with their distinctive sounds. “Let Me” starts off with a spacey synth beat and is reminiscent of something off Portamento, but much more ominous. “Break My Heart” is very 60s pop. It’s another lowbeat tune about pining for someone who’s no longer in the equation. Encyclopedia is not an upbeat album, but more of a honest look at the tumultuous times one may face when parting ways with either those you’re close to or in love with.

“Face Of God” is The Cure lite, taken right out of the 80s haze. “U.S. National Park” is a simple pop tune; its pleasant sounds are relaxing (though its lyrics are lacking in depth). “Deep In My Heart” gets things back on track. It’s vintage Drums with a new, edgier twist. “There Is Nothing Left” is the finest track on the record. Instantly catchy, beautifully constructed, and darkly seductive, the key ingredients found here create a somber tune that somehow still shines with all its despair.

Closing track, “Wild Geese,” might throw avid Drums fans for a loop. It creates a new realm for a band with potential to accomplish great things. While the synths resonate an affecting nature, The Drums actually took a chance with this different approach. It’s a shame the end concluded as softly and downbeat as it did, but that seems the direction they wanted to shed their own light upon. At 49 minutes and 12 tracks, Encyclopedia is an album resurrected from the ashes of despondency. With the running themes of lyrics that engulf misery and longing, the record is like a punch in the gut or more so in the heart. The Drums walk along this desolate and discombobulating path in which there are plenty of attractions worth seeing (in this case hearing). Fans of the group may welcome the rebirth of their old testament without the full scriptures that once comprised this band. Overall, it will spark curiosity alongside bewilderment for listeners to behold.

Encyclopedia is out this week via Minor Records. For more information about their current tour, visit their Facebook.

His father has always been an avid fan of 70s and 80s artists. He introduced Sean at an early age to the likes of many rock groups of that era. In the late 90s, Sean acquired a fondness for the likes of such alternative bands as Smashing Pumpkins, Goo Goo Dolls, and Red Hot Chili Peppers. In high school, he gravitated towards artists like Brand New, Saves The Day, and Fall Out Boy. As Sean entered California State University Fullerton, where he earned his BA in Radio/TV/Film, his music taste expanded to the realm of Broken Social Scene, The National, and Death Cab For Cutie. For as long as Sean can remember, he has always had the desire of launching his own stories that would someday be presented through television, film, and print. This form of expression continuously uplifts his spirit. Sean is a certified TRX fitness trainer and teaches group classes as well.

Big Spider’s Back With A Proper Full Length Debut

A Minute with The Drums

Listen to The Drums
Tags: the drums